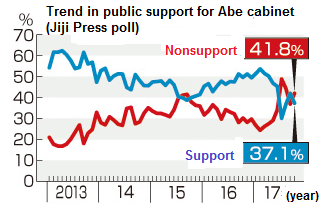 In the October 2017 public opinion poll conducted by Jiji Press on Oct. 6–9, public support for Abe’s cabinet stood below disapproval for the first time since the August poll, as the support rate dropped 4.7 percentage points from the previous month to 37.1% and nonsupport rose by 5.1 points to 41.8%. Meanwhile, 30.7% of voters said they are planning to vote for Prime Minister Shinzo Abe’s Liberal Democratic Party (LDP) in the proportional representation blocs of the Oct. 22 House of Representatives election. Tokyo Governor Yuriko Koike’s Party of Hope came second with support from 11.8%.

The results are believed to reflect the impact of Koike’s vague position: She is not running in the Lower House election herself and has not announced who the party will nominate as prime minister [if it were to win]. The Constitutional Democratic Party of Japan (CDPJ) has entered the fray, and there is the possibility that voters’ sentiment may change.

After the LDP and Koike’s party came Komeito, the LDP’s coalition partner, with support from 5.9%. It was followed by the Japanese Communist Party with 4.5%, the CDPJ with 4.4%, Nippon Ishin (Japan Innovation Party) with 3.1% and the Social Democratic Party with 1.2%. Meanwhile, 33.8% said they have not decided which party they will vote for.

The survey was conducted on Oct. 6–9 through individual interviews. For the survey, a total of 2,000 people were sampled from among men and women, aged 18 and over, across the nation. The valid response rate was 65.1%.