Some 47% of respondents to a Mainichi Shimbun special opinion poll answered that they would not want current Prime Minister Shinzo Abe to continue in his position following the Oct. 22 general election, while 37% of the pollees think he should stay on.

While the results of the poll predict Abe’s Liberal Democratic Party (LDP) may win over 300 seats in the House of Representatives, it appears that this is not directly connected to the popularity of the prime minister himself.

Among supporters of Yukio Edano’s Constitutional Democratic Party of Japan (CDPJ), 89% responded that they were against Abe continuing his role. That number was 80% for Tokyo Gov. Yuriko Koike’s Party of Hope supporters and 88% for backers of the Japanese Communist Party (JCP) led by Kazuo Shii. Even among respondents who did not support any party in particular, 59% said they were against Abe staying on as prime minister, a large margin compared with the only 25% who supported him.

On the other hand, 76% of LDP and 57% of Komeito backers responded in favor of Abe, showing a clear gap in the results between supporters of the ruling parties and those of the opposition.

The percentage of opposition party support was high in the proportional representation blocs among those against Abe continuing as prime minister – 26% said they would vote for the CDPJ, 20% for the Party of Hope, and 11% for the JCP. In these constituencies, it is clear that anti-Abe votes are being divided among the opposition parties. However, 12% of those who disapprove of Abe said they would vote for the LDP in the proportional representation blocs.

On the other hand, 61% of respondents supporting Abe to stay on as a prime minister said they were voting for the LDP.

Some 16% of independents said they would vote for the LDP in the proportional representation segment of the Lower House race while 15% said they would select the CDPJ and 11% the Party of Hope.

[Polling methodology: The survey was conducted in cooperation with the Japan News Network (JNN) by pollsters over the three-day period of Oct. 13–15 targeting telephone numbers across the nation on a computer-aided random digit sampling (RDS) basis for each of the 289 single-seat constituencies. In addition to the questions listed, the survey also asked respondents how they will vote in the single-seat constituency segment and the proportional representation segment of the vote. The survey excluded landline numbers in municipalities designated as “difficult-to-return” zones due to the Fukushima Daiichi Nuclear Power Plant accident. Responses were received from 73,087 voters from around the nation.] 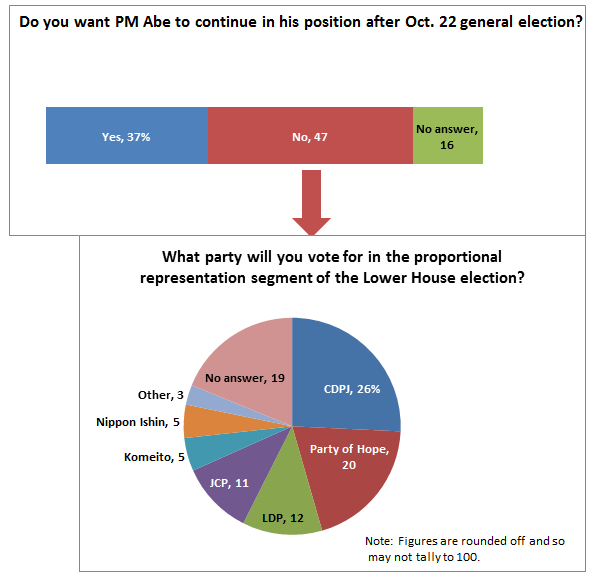