Q: The consumption tax rate is scheduled to be increased to 10% in October 2019. Are you in favor of or opposed to the tax hike?

Q: Do you want Prime Minister Shinzo Abe to continue in his position after the Oct. 22 general election?

Q: What issue will you prioritize most in deciding how to vote in the Lower House election?

Q: Which political party do you support?

Q: Will you vote in the upcoming Lower House election?

(Note) Figures rounded off. “0” indicates that the figure was below 0.5%. “No answer” omitted.

Polling methodology: The survey was conducted in cooperation with the Japan News Network (JNN) by pollsters over the three-day period of Oct. 13–15 targeting telephone numbers across the nation on a computer-aided random digit sampling (RDS) basis for each of the 289 single-seat constituencies. In addition to the questions listed, the survey also asked respondents how they will vote in the single-seat constituency segment and the proportional representation segment of the vote. The survey excluded landline numbers in municipalities designated as “difficult-to-return” zones due to the Fukushima Daiichi Nuclear Power Plant accident. Responses were received from 73,087 voters from around the nation. 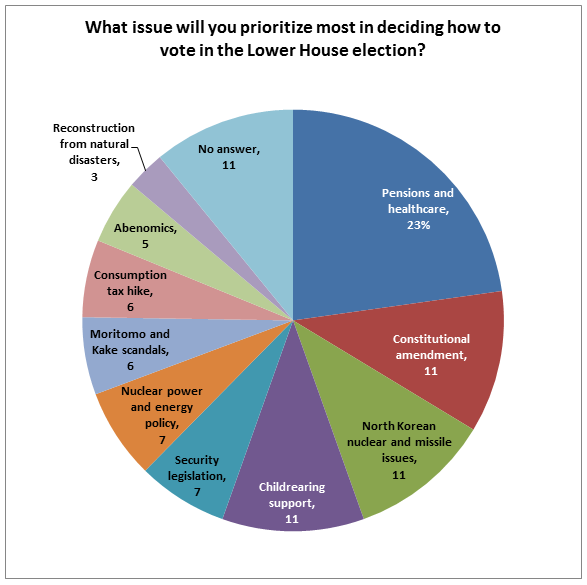