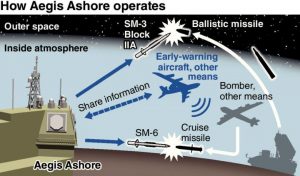 The government is considering equipping planned ground-based Aegis Ashore systems with the capacity to intercept cruise missiles, in addition to the ability to defend against ballistic missiles.

With Chinese bombers making repeated flights in areas around Japan, the government believes it should also prepare for attacks by cruise missiles, multiple government sources said.

The government intends to introduce two Aegis Ashore systems in Japan by around fiscal 2023 as part of the effort to boost the nation’s missile defenses.

These would be equipped with SM-3 Block IIA missiles, a new interceptor being jointly developed by Japan and the United States with the capacity to intercept ballistic missiles at altitudes exceeding 1,000 kilometers.

The government is also considering equipping the systems with SM-6 anti-air missiles, which are multifunction interceptors that also can take down cruise missiles.

In the United States, systems that can deal with low-altitude threats, such as from cruise missiles or fighter planes, as well as ballistic missiles are called “Integrated Air and Missile Defense.”

The U.S. government is developing and deploying IAMD systems that include interceptor missiles and information-sharing systems.

The SM-6, a U.S.-developed anti-air missile, is the core of IAMD systems. Its range is said to be more than 300 kilometers, and it is able to respond to attacks using radar information provided by early-warning aircraft and other means.

It is considered highly effective against cruise missiles that fly at low altitudes, which are difficult to detect by ground- or ship-based radar.

It can also intercept short- and intermediate-range ballistic missiles. Under two Aegis Ashore systems, SM-6 interceptors would not cover the whole of Japan unlike SM-3 Block IIA missiles, but could provide constant protection of the capital area and other important points from cruise missiles.

The government wants to deploy the SM-6 out of a heightened sense of urgency over the threat posed by Chinese cruise missiles, the sources said.

China’s H-6 aircraft, a domestically produced strategic bomber, is capable of carrying cruise missiles loaded with nuclear warheads that have a range of more than 1,500 kilometers.

These aircraft are frequently sighted in the skies around Japan. The anti-air missiles the Self-Defense Forces currently possess are not designed to intercept cruise missiles until they are relatively close.

The Defense Ministry has requested ¥2.1 billion in next fiscal year’s budget to acquire SM-6 interceptors for experimental purposes. The ministry wants to equip Aegis cruisers with the SM-6 before introducing Aegis Ashore, the sources said.

The main purpose of deploying SM-6 interceptors on Aegis cruisers is likely to defend against aircraft and anti-ship missiles.