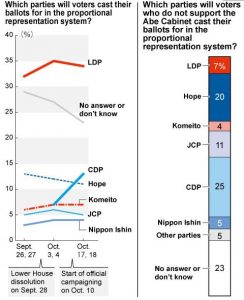 Asahi Shimbun conducted an opinion poll on the House of Representatives election by phone on Oct. 17-18. When asked which party they plan to vote for in the proportional representation segment, 34% of the respondents chose the Liberal Democratic Party (LDP), showing that the party, which was favored by 35% of respondents in the previous poll conducted on Oct. 3-4, is enjoying stable support. Support for the Constitutional Democratic Party of Japan (CDPJ) increased from 7% to 13%, exceeding the Party of Hope’s 11% (down from 12%). Among other parties, 7% supported the Komeito, 5% favored the Japanese Communist Party (JCP), and 4% chose Nippon Ishin [Japan Innovation Party].

Among pollees who did not support the Abe cabinet, 25% chose the CDPJ, 20% picked the Party of Hope, and 11% opted for the JCP. Votes critical of the administration remain divided.

When asked what would be an ideal administration from now on, 37% opted for a LDP-led administration, while 36% preferred an administration led by a political party other than the LDP. However, as many as 73% disapproved of a situation in which the LDP wields dominant power in the Diet, while 15% regarded this to be a good situation. This figure stood at 58% even among those who supported the Abe cabinet.

The Democratic Party (DP) split up shortly before the Lower House election and its Diet members are now running as candidates of the Party of Hope or the CDPJ, or as independents. Fifty percent of respondents said this was bad, while 25% said it was good. Even 57% of supporters of the cabinet expressed negative views about this.