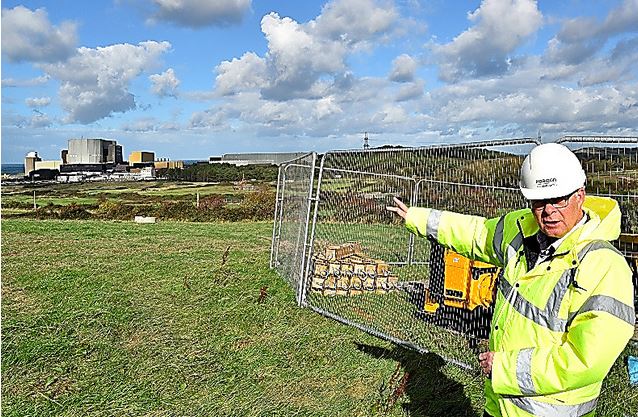 Multiple excavators and trucks are busy at work conducting subterranean investigations on a site adjacent to the Wylfa Nuclear Power Station that was decommissioned in 2015 on Anglesey, an island off the northwest coast of Wales facing the Narrow Seas. This is the new nuclear power plant construction site that developer Horizon Nuclear Power, a unit of Hitachi, aims to operate sometime around 2025.

“This nuclear power plant is important not only for this region but also for the UK,” says Horizon’s Stakeholder Relations Manager Richard Foxhall (56). Hitachi intends to build two nuclear reactors it developed with General Electric (GE). Some 8,350 workers will be employed during the peak of construction, and 850 will operate the plants after they go online.

Hitachi is currently looking for investors to fund the project and is expected to make its investment decision during 2019. “We cannot afford to fail,” says one Hitachi executive. The project is said to cost 1.5 to 2 trillion yen for two reactors.

Financial institutions are hesitant to provide loans for the project. “This is not the sort of project we should be actively engaging in, but we can’t avoid it because the government (METI) is involved,” laments one senior executive of a major bank. Nuclear power plants have been one of the Abe administration’s key infrastructure export initiatives.

When power plants are constructed in the UK, the builders must shoulder associated risks until the plant starts to generate earnings after the start of operations. For this reason, many companies involved in new nuclear power plant projects are government-backed, such as Électricité de France and China General Nuclear Power Group.

Currently, a proposal for Nippon Export and Investment Insurance, a government-owned insurance provider, to insure the full amount of the Hitachi project has been made by those involved. It is rare that a project for a developed nation is fully covered by trade insurance.