Documents indicate possibility of active fault in seabed near Henoko 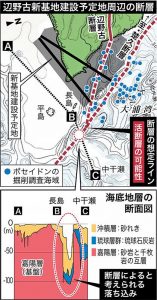 Ryukyu Shimpo led with a report saying that it has learned that documents drafted by the Defense Agency in 2000 on the construction of the Futenma replacement facility include information about a 50-meter-deep trench in the seabed below the FRF construction site off Henoko. While saying that the documents did not specify whether the trench is part of an active fault, the paper wrote that its presence casts doubt on the appropriateness of the current site for the construction of the FRF.