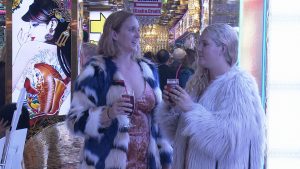 NHK’s “Close-up Gendai +” reported that although Japan ranks 16th in the world in the number of foreign visitors, it ranks 44th in the amount of consumption by foreign visitors. The government is reportedly looking at the so-called night-time economy as a way to boost consumption by foreign tourists. The program pointed out that while shops, museums, entertainment facilities, and transportation services in many countries are open until late at night, most shops in Japan close at 8 p.m. Although entertainment accounts for nearly 10% of foreign visitors’ spending in nations like the U.S., France, and Germany, it only accounts for about 1% in Japan. The program reported on ongoing efforts to promote the “night-time economy” in Japan.