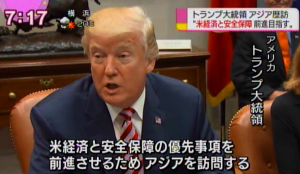 NHK reported this morning that President Trump said during a meeting held at the White House on Tuesday that he will be visiting Japan, South Korea, China, Vietnam, and the Philippines this month, and expressed hope to advance U.S. priorities. The President was quoted as saying: “In a few days, I will be traveling to Asia to advance America’s economic and national security priorities.” The network said President Trump is expected to discuss with his counterparts measures to deal with North Korea’s continued nuclear and missile development and exchange views on ways to realize fair trade based on the “America First” policy. The President also reportedly expressed his intention to strengthen ties with the Philippines, saying that the nation sits in “an important strategic location.”

The network also reported that a senior USG official commented at a press conference on the President’s visit to Japan, quoting him as saying: “The President will probably discuss how the U.S. and Japan can cooperate to promote fair and open trade and investment in the Indo-Pacific region.”