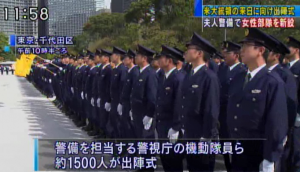 NTV and TV Asahi reported at noon that the Tokyo Metropolitan Police Department (MPD) held a kickoff ceremony this morning for about 1,500 riot police officers who will be deployed for President Trump’s visit. TV Asahi said the MPD will mobilize more than 10,000 police officers for the visit by President Trump and the First Lady to Japan from Nov. 5 to 7, adding that it has also established a new unit composed of female officers in order to protect the First Lady and other female VIPs. A female police officer was quoted as saying: “Our job is to check for suspicious objects and people where female VIPS visit…. We would like to use our female intuition and perspective to effectively maintain security.”

Meanwhile, Fuji TV reported that MPD is asking hotels for cooperation in preventing terrorism, showing a police officer asking a hotel manager to notify the police if anyone makes a reservation for several days during the President’s visit. The network said police are also asking car rental agencies to be on alert and drugstores to notify the police if anyone tries to buy a large volume of chemical agents.