By Masashi Miyamoto, member of the Sankei Shimbun editorial board 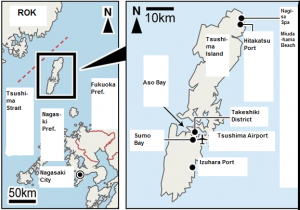 Following is a conversation between a Japanese construction company president in his 50s and a South Korean tour guide:

“I’m glad that a new hotel was built, because it will attract many Korean tourists,” said the president. “It won’t last long,” said the tour guide. Once Chinese begin coming to the island, Koreans will stop coming and I’ll lose my job. Chinese are already inundating Fukuoka, so it is only a matter of time before they come to Tsushima Island.” The president said, “Both Chinese and Koreans can come to the island.” The guide replied, “Once Chinese come to the island, they will take over everything and Koreans will have no opportunities.”

This spring, a major Japanese hotel chain opened a property near the Izuhara port, the gateway to Tsushima, targeting the growing number of Korean tourists. The Korean tour guide said: “Chinese have already come to the island. In fact, I saw some today. They seem to be interested in Tsushima and I heard that they have purchased a tract of land and buildings in the Izuhara district. Some Chinese come to the island to examine real estate before they purchase it.” Korean colleagues of this tour guide share the same sense of crisis over the emergence of Chinese on the island. 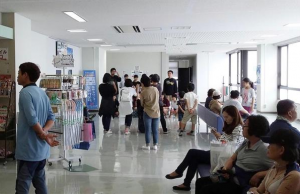 “Both the ROK and China want Tsushima Island. But once China enters the picture, South Korea will have no chance,” said the guide. A Japanese taxi driver in Izuhara echoed the guide’s comment, saying, “I can easily recognize Chinese tourists by the large bags they carry for shopping sprees. They don’t shop the same way as Koreans.”

A man who is familiar with the hotel industry in Izuhara quoted a businessman associated with a nationwide hotel chain as saying, “The hotel industry builds new hotels in anticipation of growth in Chinese tourists, so it is only a matter of time before China makes its move for Tsushima Island.”

Currently, large-scale repair work is underway at Izuhara Port. According to the Nagasaki prefectural government, a pier for domestic ferry boats is under construction; however, the final scale of the project is reportedly still under discussion.

According to multiple sources in the Tsushima’s business circles, a plan to repair the pier for receiving a large-size luxury cruise ship is under consideration. Although the prefectural government said it was examining the plan, a source connected to the tourism industry cited the fact that 2,000 to 3,000 Chinese tourists are arriving by luxury cruise ships at Hakata Port and said, “If the pier is improved to accommodate luxury cruise ships, not only Koreans but also Chinese tourists would come to Tsushima in great numbers. If that happens, Chinese would buy up all real estate owned by Korean interests as they did in Hokkaido.”

A sense of crisis is spreading across the island. A senior official of the business community in the town of Izuhara said: “Tsushima Island serves as a fortress and China’s seizing the island would lead to its controlling the Sea of Japan. China aims to sail the Sea of Japan as if it were its own inland sea, so it is natural for China to try to seize the island.” The senior official went on to say, “I suspect that Chinese money is behind the spree of purchases of Tsushima’s real estate by Koreans.”

A China-watcher who became a naturalized Japanese citizen corroborated this suspicion, saying, “China definitely wants Tsushima Island because of its geostrategic importance. It is highly possible that China has already purchased real estate under Korean or islanders’ names.”

One reason for the Korean real estate buying spree is the accelerating depopulation and graying of the island. 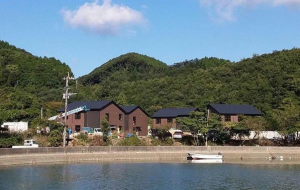 A source associated with the real estate industry on the island said: “Depopulation is being accelerated. Although islanders’ are registered as Tsushima’s residents, many are living somewhere outside the island. When I drove the town at night, I noticed many unlighted houses.”

According to the Ministry of Internal Affairs and Communications, the population of Tsushima Island as of 2000 was 41,000 but fell to 31,000 in 2015. But the numbers reported by the ministry were based on the local government’s official resident registration, so the islanders who actually lived on the island were probably far fewer in number. Tsushima ranked 120th among 1,741 municipalities in Japan in rate of population decrease as of October 2016. Of the island’s population, 33.9% were 65 years old or older as of 2015, 7.3 points higher than national average (26.6%). It is anticipated that the ratio will increase by 10.7 points, reaching 44.6% by 2040. In other words, by that year 4 in 10 islanders will be senior citizens.

The depopulation and aging on the island are changing Tsushima’s demographic situation and accelerating real estate purchases by South Koreans. The source related to the real estate industry said, “Until five or six years ago, islanders still felt obligated to stay on the island to tend family tombs. But nowadays islanders feel less obligated to do so, and that is accelerating ending islanders’ family lines.”

“When islanders turn the retirement age of 60, they sell their houses and leave the island for the mainland to live with their children. The number of such islanders is increasing at a remarkable rate,” said a shipping agent.

A Tsushima City Assembly member who is familiar with the current situation said, “Those islanders want to sell their houses as soon as possible. Korean money seeks such islanders through their networks. It is impossible to reverse the trend.”

In order to resolve issues involving border islands, the Act on Preserving Remote Island Areas came into force in April this year. As part of the law, air- and sea-fares were lowered by 40% for islanders. For example, the airfare from Tsushima Island to Fukuoka Airport was lowered from 11,200 yen to 7,300 yen; the fare for the high-speed ferry boat from Izuhara Port to Hakata Port, from 6,330 yen to 4,450 yen; the regular ferry boat. from 3,660 yen to 2,620 yen.

However, many islanders criticize the discount, saying, “Yes, only islanders can take advantage of the new fares, but the new fares have an unintended effect.” What they means is that with the new fares, islanders make a day trip to Hakata in Fukuoka for shopping, with a consequent drop in sales in stores on the island.

A local politician also points out that as the new law is not designed to facilitate mainlanders’ visiting the island, it won’t help boost the island economy and apply the brakes to depopulation.

A taxi driver on the island said, “If the new law made the cost of transportation cheaper for mainlanders, it would help increase the number of Japanese tourists from the mainland. Korean tourists don’t help stimulate the island’s economy.”

While some islanders view the new law as a step forward, some others view it as ineffective in revitalizing the island economy and preserving the border island.

There are islanders in Izuhara who voice their concern, saying, “If things are left as they are now, depopulation will continue and the island will not be able to serve its function of defending the country as a border island. Unless the government takes measures to stem depopulation now, a similar problem will occur on other border islands.

A local assemblyman said, “All border islands should be designated special islands for national defense with regulations against selling their real estate in exchange for the government’s protection of islanders as border guards for protecting the country.”