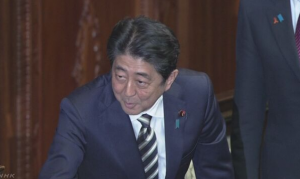 NHK reported this afternoon that Prime Minister Abe was reelected prime minister at a plenary session of both chambers today, saying that the premier is expected to reappoint all of his cabinet members and launch his fourth cabinet later today. The network said Abe will hold talks with Komeito leader Yamaguchi at the Kantei and immediately assemble the cabinet. The premier is expected to hold a press conference in the evening to explain his policies.