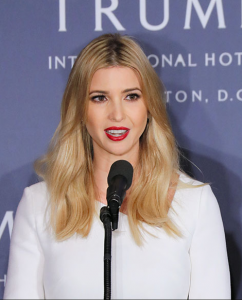 A squad of female police have smartened themselves up to guard U.S. presidential adviser Ivanka Trump, who arrives in Tokyo on Nov. 2.

Gone is the bulky body armor used when facing rioters or dangerous criminals, to be replaced by smart black suits.

It is the first time that Tokyo’s Metropolitan Police Department has formed a female-only security team.

Ivanka, a popular fashion icon, will have dozens of female officers, mostly riot police members, watching over her as the police expect many female admirers to gather to catch a glimpse of her.

“We opted for a more cultivated look to suit the occasion,” an officer in charge of the security plan said. 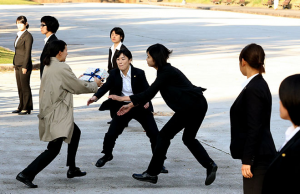 Female police officers block a fan in a drill

A woman holding a gift or a bouquet of flowers jumps out of a crowd to hand them to a female “VIP” who is walking past in the Imperial Palace Outer Gardens in central Tokyo.

In a flash, female officers pounce on the trespasser and escort her back into the crowd.

That was just a drill, part of the training that was staged for the media on Nov. 1.

Ivanka will attend the World Assembly for Women, an international conference for empowerment of women and related issues, on Nov. 3.

U.S. President Donald Trump, her father, and first lady Melania, her mother-in-law, are scheduled to arrive Nov. 5 for a three-day visit.