The approval rating of Japanese Prime Minister Shinzo Abe’s cabinet ticked up in a new Nikkei Inc./TV Tokyo survey that also shows a shrinking margin of support for the newly re-elected leader’s proposal to revise the country’s pacifist constitution.

Support for the cabinet, which was reshuffled in August and reappointed in its entirety after Abe’s election Wednesday, climbed to 54% in the spot poll conducted on Nov. 1-2, up 4 percentage points from the last regularly scheduled survey in September. Its disapproval rating fell 4 points to 38%.

The poll confirmed a continued recovery in support for Abe’s government after scandals this year that pushed its approval rating to a low of 39% in July. But it has yet to regain its pre-scandal support level of around 60%. Though governments tend to enjoy higher poll numbers after national electoral victories, the landslide win by Abe’s Liberal Democratic Party in last month’s snap lower house election provided only a limited boost.

A plurality of cabinet supporters — 45% — cited the sense of stability it provides, while 32% praised its international perspective. Of those disapproving, 46% said they do not consider the cabinet trustworthy, while 40% dislike having an LDP-dominated cabinet.

The cabinet won especially high marks among LDP supporters, 91% of whom voiced approval, and younger generations, with 73% of 30-something respondents approving. But independents remain skeptical. Just 24% of unaffiliated voters support the government, and 55% said they do not trust Abe, compared with 40% of all respondents.

The poll also asked about Abe’s proposal to revise the constitution’s war-renouncing Article 9, which would leave the two existing clauses untouched while adding new text to explicitly recognize the Self-Defense Forces. Public sentiment has wavered, with 44% of respondents in favor — down from 51% in a May survey posing a similar question — and 41% against, up from 36% previously.

Though the change is among Abe’s main goals, voters have other priorities. Asked what the government should work on first, with multiple responses permitted, 53% of respondents chose social security reform. Tax reform, including the consumption tax, and economic stimulus tied for second place at 35%. Just 13% said revising the constitution should be a priority, putting it in ninth place among the 10 options, above only administrative reform.

The LDP platform included a pledge to raise the 8% consumption tax to 10% in October 2019 as planned and use a portion of the revenue to fund free early childhood education and child care support. This won broader support than changing the charter, with 56% approving and 34% opposed.

Respondents were split on the idea of a third three-year term for the prime minister after his second term ends in September 2018, with 44% in favor and 46% against. The results fell largely along partisan lines — 69% of LDP supporters approved, while 87% of those not supporting the cabinet were opposed. Just over half of independents voiced disapproval.

The survey of individuals aged 18 and older via random-digit dialing received 973 responses, for a response rate of 45.5%. 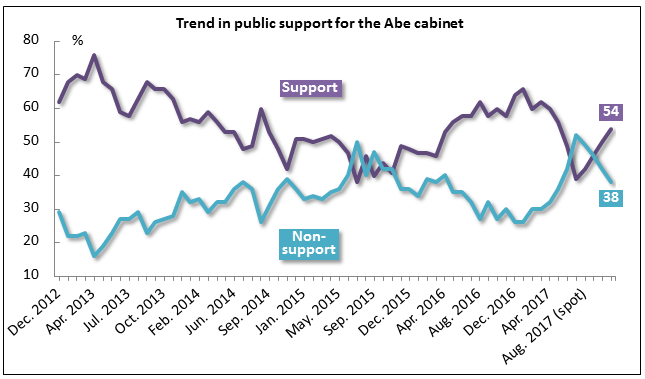 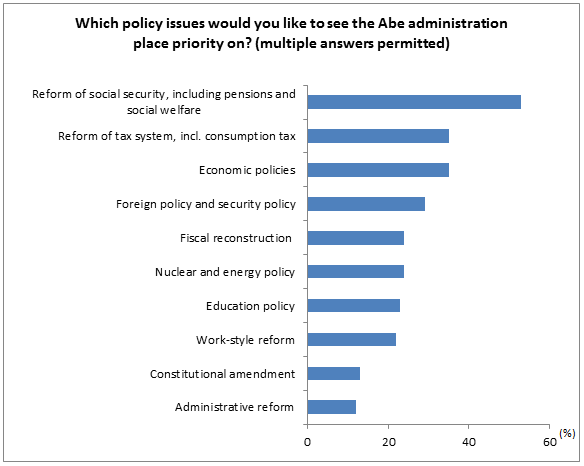 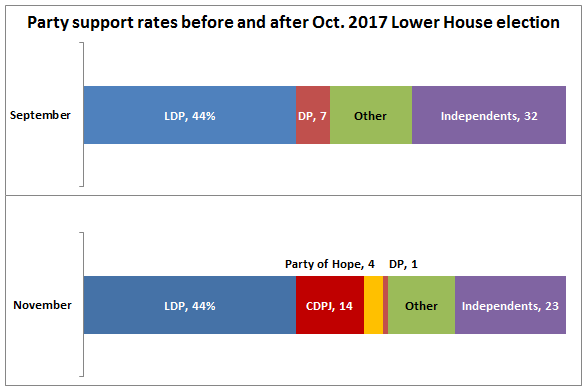