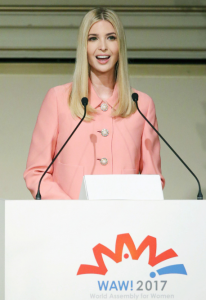 All Saturday morning papers reported on remarks delivered during the World Assembly of Women (WAW!) conference in Tokyo on Friday by Advisor to the President Ivanka Trump, who called for enhanced efforts to promote women’s advancement by removing legal and cultural barriers. Expressing her willingness to use her influence and experience as an entrepreneur, Ms. Trump pledged to work harder to empower women. “It is my hope that by the time my daughter Arabella grows into a woman, she will … simply be a woman afforded the same opportunities as her male peers and equipped with the education and support she needs to fulfill her unique potential,” she said.

In a related development, most Saturday papers reported that during the WAW! conference, Prime Minister Abe pledged $50 million in financial contributions for a World Bank fund on female entrepreneurship promoted by Ivanka Trump. The premier said Japan will continue to exercise strong leadership in empowering women. The dailies added that Ms. Trump also held talks with Foreign Minister Kono and two other Japanese cabinet ministers and exchanged views on how to promote women’s empowerment.