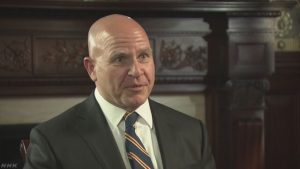 NHK carried an exclusive interview on Friday with National Security Advisor McMaster, who noted that the United States will increase military pressure to deter further provocations by North Korea. He mentioned that the U.S. currently has three aircraft carriers deployed in the Western Pacific region. “The first thing to do is to make sure the North Korean regime knows that any aggression on its part will be met with an overwhelming response,” he was quoted as saying. “That’s what these carriers symbolize.”

Asked whether Washington would notify Tokyo if it decided to exercise military action, McMaster said the Trump administration “keeps open and transparent relations” with its allies, including Japan. He went on to say that the U.S. and Japan are “completely aligned with each other in terms of our assessment of security threats and what we can do together to address those threats and secure our citizens.” On President Trump’s plan to meet with the families of the Japanese abductees in Tokyo, McMaster stressed that the President will deliver a “message of sympathy and empathy.”

Most newspapers reported on McMaster’s separate press remarks on Thursday in which he disclosed that the Trump administration is considering designating the DPRK as a state sponsor of terrorism as part of an overall strategy toward North Korea. He underscored that Washington is committed to isolating North Korea diplomatically and economically, and welcomed deeper security coordination between the U.S. and Japan by saying that Japan is improving its defense capabilities. McMaster indicated that the U.S. military will continue to conduct “freedom of navigation operations” in the South China Sea to ensure peace in the region.