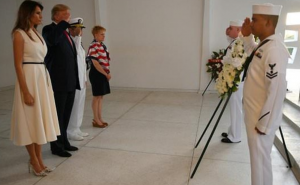 Sunday’s Asahi, Mainichi, Yomiuri, and Sankei wrote that President Trump posted a message saying “Remember #PearlHarbor. Remember the @USSArizona!” on Twitter after visiting the USS Arizona Memorial on Friday. Noting that “Remember Pearl Harbor” was a slogan used to inspire patriotism in the American people after Japan’s attack on Pearl Harbor during WWII, the paper wrote that the intention of the President in using this phrase is unknown because he did not refer to Japan in the message. Yomiuri noted that President Trump criticized President Obama’s visit to Hiroshima in May 2016 by saying: “Does President Obama ever discuss the sneak attack on Pearl Harbor while he’s in Japan?”