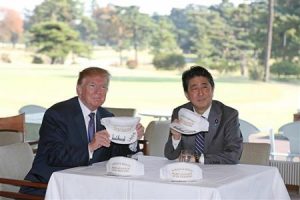 All papers reported on the red carpet treatment given to President Trump by Prime Minister Abe, highlighting their golf game in the afternoon and teppanyaki dinner in the evening. Pointing out that President Trump and PM Abe will have four meals together during the President’s three-day stay in Tokyo, Nikkei said the prime minister’s “omotenashi” hospitality is tantamount to the U.S. leader being treated as a quasi-state guest. The paper added that Abe has been extremely eager to entertain the Trumps, noting that he also rolled out the red carpet for Advisor to the President Ivanka Trump a few days ago.

Asahi wrote that President Trump’s views toward Japan appear to have changed drastically, explaining that although he was very critical of Japan during the election campaign last year for its trade surplus with the U.S. and “unwillingness” to shoulder the cost of stationing U.S. troops, the President called Japan yesterday a “treasured partner and a crucial ally.” The daily attributed this change in attitude to the briefings on East Asia and Japan that his national security team has provided and the close personal bonds that Prime Minister Abe has built with him. Ambassador Hagerty reportedly stated: “I think the two leaders have created and built the highest level of trust by playing golf together.” According to the dailies, professional golfer Hideki Matsuyama, who played golf with the two leaders, released a comment afterward saying: “I was extremely honored to be invited.”

Yomiuri claimed that the relationship of trust between the President and prime minister is unparalleled. It added, however, that some Japanese officials are worried that Abe’s excessive “tilt” toward the U.S. leader may backfire if miscommunications occur even on minor matters. Several papers took up concern raised among ruling and opposition parliamentarians about the extremely close bonds between the two leaders. Former LDP Secretary General Ishiba said: “We should acknowledge that the Trump administration has failed to obtain the solid trust of the American people.”