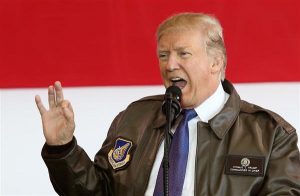 All papers reported on President Trump’s arrival at Tokyo yesterday, highlighting his remarks to U.S. and Japanese troops at Yokota AB in which he underscored the special relationship between the U.S. and Japan by saying: “Japan is a treasured partner and a crucial ally…. For almost 60 years, the military alliance we see on this base has endured — a cornerstone of sovereignty, security and prosperity for our nations, this region and indeed, the entire world.” The President hailed the strong partnership built between the U.S. military and the SDF at the installation and elsewhere across Japan. With North Korea’s relentless provocations apparently in mind, the President said: “No one, no dictator, no regime, and no nation should underestimate, ever, American resolve.”

In the same speech, the President reportedly endorsed an idea proposed by Prime Minister Abe on enhancing mutual cooperation by the U.S., Japan, Australia, and India by saying: “We will seek new opportunities for cooperation and commerce, and we will partner with friends and allies to pursue a free and open Indo-Pacific region.”