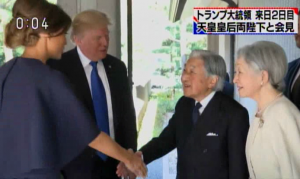 All networks reported that President Trump and the First Lady visited the Imperial Palace this morning and were greeted by the Emperor and the Empress at the entrance. The networks showed the couples smiling and shaking hands. NHK said this is the first time for the Emperor and Empress to meet with a U.S. president since President Obama visited Japan as a state guest three years ago. The networks said the couples talked for about 20 minutes inside the palace.