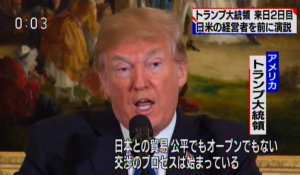 All networks reported at noon that President Trump delivered remarks before Japanese and American business leaders at the Ambassador’s Residence this morning. NHK quoted the President as saying: “Several Japanese automobile industry firms have been really doing a job, and we love it when you build cars.” The network said the President gave Japanese automakers high marks and called for further investment in the U.S.to create jobs there. The President also said sales of U.S. cars are weak in Japan and expressed his desire for a new trade deal to correct the trade imbalance. The President was quoted as saying: “Right now, our trade with Japan is not fair and it’s not open, and we’ve started the process….We will have more trade than anybody ever thought of under TPP. We will have a much bigger trade…and it will be a much less complex situation.” According to NHK, the President also referred to the U.S. defense industry, and expressed hope to increase exports of defense equipment to Japan.