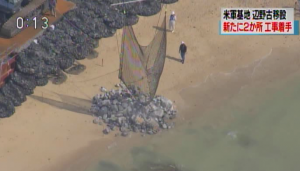 NHK reported at noon that the Okinawa Defense Bureau began bank protection work at two new locations in Henoko this morning, saying that local opposition is inevitable as Okinawa has been calling for the cancellation of the work following the discovery of rare coral in the area. The network showed rocks being delivered and placed in the ocean. The network explained that the bank protection work is aimed at securing the area to be reclaimed.