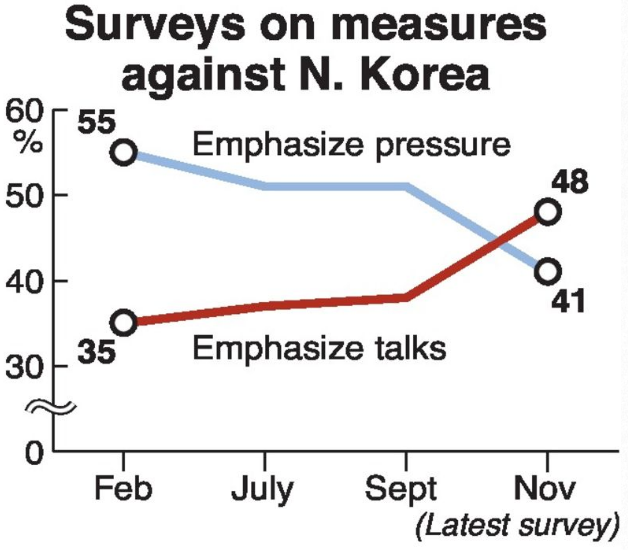 Forty-eight percent of respondents to a Yomiuri Shimbun survey conducted following the inauguration of Prime Minister Shinzo Abe’s fourth Cabinet said the international community should place importance on “dialogue” in dealing with North Korea, exceeding the 41 percent who said “pressure” should be applied on the country.

Abe has given great weight to the North Korean issue. The nationwide survey was conducted on Wednesday and Thursday; the same question — whether to emphasize “dialogue” or “pressure” — was asked in surveys conducted in February, July and September. At those times, more people responded with “pressure.” This reflects the shifting public opinion on dealing with North Korea.

Regarding Abe’s reappointment of all incumbent ministers to their posts, 45 percent evaluated the decision highly, while 39 percent did not.

Asked what the Abe Cabinet should prioritize — with multiple answers allowed — the highest percentage of 62 percent went to both “diplomacy including North Korean issues and security” and the “economy and employment.”

Forty-three percent of respondents were in favor of Abe remaining as the Liberal Democratic Party president after next September, when his term expires, and 46 percent said they were not.

Regarding constitutional reform, 62 percent thought the Diet should carry out discussions to reach a conclusion on the details of the bills that would be required.

The latest survey was conducted by calling 868 households with landline phones and 1,225 mobile phone users — all eligible voters aged 18 or older — with a random digit dialing method. Of them, a total of 1,089 people — 536 people on landlines and 553 people on mobile phones — gave valid answers.