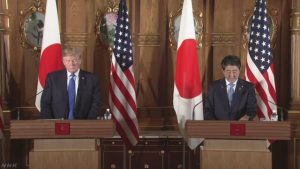 NHK reported that President Trump and Prime Minister Abe held a working lunch and a summit at the Akasaka Palace this afternoon, after which they held a joint press conference. The network reported online that PM Abe disclosed at the press conference that the two leaders agreed to maximize the pressure on North Korea, and that the GOJ will decide on Tuesday to freeze the assets of 35 North Korean organizations and individuals. The premier also reportedly explained that the two nations will continue to hold discussions on bilateral trade within the framework of the U.S.-Japan Economic Dialogue. The network quoted Abe as saying: “President Trump’s first tour in Asia is historic given the tense situation in North Korea and the region. Japan was the President’s first stop, and we were able to demonstrate to the world the strong bond between the two nations under the alliance.” The premier said that the two leaders took time during multiple meetings to analyze the current situation in North Korea and completely agreed on the measures to be taken in the future. Abe once again expressed support for the President’s position that all options are on the table, and said he was able to confirm that the U.S. and Japan stand together one hundred percent. Abe also reportedly disclosed that the two leaders agreed to maximize pressure on North Korea and that China should play a bigger role. The premier also said the two leaders agreed to work together to realize a free and open Indo-Pacific region.