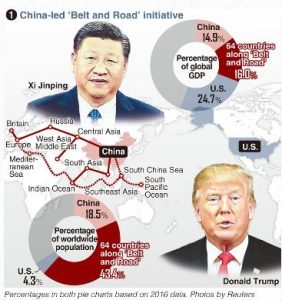 How will the administration of Chinese President Xi Jinping, now in its second term, proceed with its trade strategy? China is becoming increasingly wary about negotiations over the 11-nation Trans-Pacific Partnership free trade agreement, which includes Japan but not the United States following the latter’s withdrawal.

“Promote the establishment of the country as a trade power by expanding trade, with an emphasis on developing ‘One Belt, One Road’ (see below, chart 1). Work to facilitate trade and build a new platform for international cooperation.”

Xi emphasized this vision in his political report to the 19th National Congress of the Communist Party, which was held last month. It was a declaration that the realization of a huge economic bloc based on “One Belt, One Road,” which is led by Xi, would become the main pillar of China’s trade strategy.

In a December 2015 government document, the Xi administration announced that it would “actively construct a free trade zone with countries along the Belt and Road, and create a huge market.” This signaled that development of free trade zones would accelerate, both domestically and with partner countries, in a bid to deregulate trade in services. He stated this basic policy in his political report to the party congress.

Focus on countries within area

Zhao Jinping, director general of the Research Department of Foreign Economic Relations at the Development Research Center of the State Council, indicated a desire to complete free trade agreements with countries along the Belt and Road, at an October 2016 symposium organized by the Japan External Trade Organization’s (JETRO) Institute of Developing Economies.

“Of the 15 countries and regions with which China has concluded FTAs, 11 are along the Belt and Road. But trade with FTA signatories makes up only 29 percent of China’s total trade. The rate of trade liberalization is low, and there is ample room for future expansion,” Zhao said.

According to the China Foreign Investment Development Report 2016, direct investment by China in countries in the area in 2015 totaled $18.93 billion, an increase of 38.6 percent over the previous year. This accounts for 13 percent of total external investment, a percentage that is increasing.

So how did Xi’s government plan to react to the TPP, which was promoted by the administration of former U.S. President Barack Obama?

It is clear that they were deeply concerned not only about the security implications of a network encircling China, but also about its economic consequences.

The U.S.-China Economic and Security Review Commission, a U.S. Congressional advisory body, noted the following in their annual report published in November last year: If the TPP does not come into force and the Regional Comprehensive Economic Partnership being discussed by 16 countries, including Japan, China, countries of the Association of Southeast Asian Nations (ASEAN), comes into effect, it will bring economic benefits of $88 billion to China, and if TPP is enacted and RCEP is not, China’s economic loss will amount to $22 billion.

For this reason, some Chinese experts at that time began suggesting that TPP participation should be considered. According to a source close to the Chinese Communist Party, three main reasons underpinned their thinking:

1. External pressure could be used for domestic economic structural reform, as was the case when China joined the World Trade Organization.

2. China would be disadvantaged if it was not actively involved in the formulation of trade and investment rules.

3 China would lose face if small countries like Vietnam participated in TPP while it remained on the sidelines.

So when then U.S. President-elect Donald Trump announced plans to withdraw from the TPP after his election in November last year, palpable relief spread within the Xi administration. “The TPP is finished,” said one Communist Party source.

“The TPP’s setbacks have extended China’s timeframe for strategic opportunities.” “It is definitely very positive news for China.” Such comments from experts were published in the Chinese newspaper The Beijing News on Nov. 25 last year.

In his political report at the party congress, Xi said, “We support a multilateral trading system and will promote the creation of free trade zones.” He likely made this remark with RCEP in mind. Xi’s second-term trade strategy involves promoting the early realization of RCEP and promoting FTAs with Belt and Road countries.

Meanwhile, the Xi administration is irked by Japan’s attempts to push forward with the TPP in preparation the United States’ future return.

In July, an essay expressing the Xi administration’s true thoughts was published in the Global Times, a newspaper affiliated with Communist Party paper the People’s Daily: “Japan is the world’s third-largest economy, but its economy is less than 30 percent the size of the United States’. Its domestic market is also small. There is a very large gap between Japan’s subjective desires and its objective capabilities. It will be difficult for Japan to push ahead with TPP alone.

They don’t seem to know their own limits.”

The essay was authored by Cai Liang, a senior fellow for the Center for Asia-Pacific Studies at the Shanghai Institutes for International Studies.

Analysis by an expert on Japan-China relations concluded, “The essay displayed a strong sense of caution about a future U.S. return to the TPP.”

Japan and Australia aim to reach a broad agreement on the implementation of an 11-nation TPP at the Asia-Pacific Economic Cooperation leaders meeting in Vietnam in November.

They will strive to achieve meaningful trade liberalization, and ensure that the flimsy “China standard” will not become the global standard. It is important that Japan makes steady progress with the “TPP 11.”