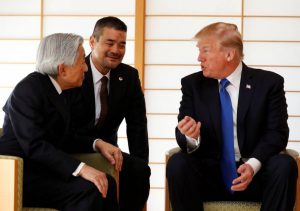 All Monday evening papers reported on Monday’s meeting between President Trump and Emperor Akihito, noting that the two enjoyed a “very amicable” conversation, according to the Imperial Household Agency. The President reportedly expressed respect to the Emperor by saying: “As I am told that you are deeply admired by all people, I am greatly honored to be able to meet you today.” In reply to a question from the Emperor about his trip to Japan, the President said: “It has gone very well. I’ve had in-depth discussions with Prime Minister Abe on a range of issues, such as North Korea, U.S.-Japan defense cooperation, and trade. The current U.S.-Japan relations are better than ever.” During the 20-minute meeting, the Emperor also reportedly offered condolences for the victims of Sunday’s mass shooting at a Texas church.