U.S., Japanese leaders in agreement on security, disagree on trade 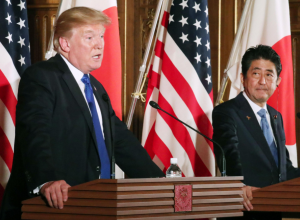 All papers wrote that President Trump and Prime Minister Abe appeared to be completely in sync on the diplomatic and security fronts, hence successfully highlighting the strong bonds between the two allies. They agreed to increase pressure on North Korea, and Abe was responsive to the President’s call for Japan to procure more U.S.-made defense equipment. The two leaders also agreed to jointly pursue the “free and open Indo-Pacific” initiative that was originally proposed by the premier, with Yomiuri saying it is unusual for a U.S. administration to endorse a foreign policy strategy formulated by the Japanese. Nikkei conjectured that the two nations are anxious to pursue this initiative to address concern about declining U.S. presence in East Asia compared with China. While quoting an unnamed senior White House official as saying “it is wrong to assume that this initiative is meant to contain China,” Mainichi said the Trump administration does not want to provoke China ahead of the President’s trip to Beijing where he would like to elicit Chinese cooperation in deterring North Korea.

The papers said, however, that the President was not conciliatory at all on the economic front, emphasizing that he has repeatedly complained about the bilateral trade imbalance during his visit to Tokyo. He was quoted as saying in his meeting with American and Japanese businessmen yesterday: “Our trade with Japan is not fair and it’s not open.” He also said in a press conference with Abe: “We seek equal and reliable access for American exports to Japan’s markets in order to eliminate our chronic trade imbalances and deficits with Japan.” However, Mainichi said GOJ officials heaved a sigh of relief as the President did not refer to an FTA this time. Asahi speculated that the U.S. leader elected not to mention an FTA perhaps based on the judgement that doing so would undermine the U.S.-Japan alliance at a time when tensions are rising on the Korean Peninsula. However, the GOJ is afraid that the President will eventually put strong pressure on Tokyo to make concessions on the trade front in exchange for offering greater security cooperation.

In a related story, Asahi wrote that the Japanese business community represented by the participants in the business roundtable with the President at the Ambassador’s residence on Monday morning is alarmed by the Trump administration’s steadfast hard line on the trade front despite its considerable investment and job creation in the United States.