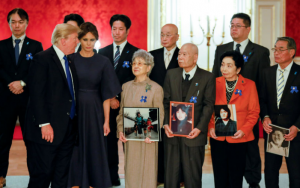 All papers front-paged reports on President Trump’s meeting with the families of the Japanese abductees at the Akasaka Palace on Monday. The papers wrote that during their 30-minute meeting, the President pledged to make efforts to help bring Japanese nationals abducted by North Korea back home by saying that he heard very sad stories from the families and that he will work closely with Prime Minister Abe to bring the abductees back to their loved ones. The President referred to the abductions during a joint press conference he held with the prime minister after the meeting with the abductees’ families by saying: “Now the spotlight is on and perhaps we can have some very good luck…. If Kim Jong Un would send them back, that would be the start of something very special.”

According to the people who attended the meeting, President Trump shook hands with each of the 17 family members, including Sakie Yokota, the mother of Megumi Yokota, who was kidnapped at the age of 13, and listened closely to their stories. Hitomi Soga, an abductee who was returned to Japan in 2002 but has not seen her mother since they were abducted together in 1978, also took part in the gathering. This was the first time for a U.S. president to meet with a returned abductee.

The family members held a news conference after their meeting with President Trump and expressed gratitude to the President for sympathizing with their suffering and expressed hope that progress will be made on the issue.

Mainichi wrote that efforts by NSC Senior Director for Asian Affairs Pottinger to urge the President to meet with the abductees’ families helped realize the meeting on Monday. According to the paper, when he met with Takuya Yokota, the brother of Megumi Yokota, on Sept. 13 in Washington, Pottinger promised him that he would convey Yokota’s desire for President Trump to meet with his parents by citing the Marines’ motto, “No One Left Behind.”