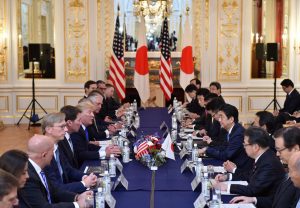 All papers gave prominent front- and inside-page play to yesterday’s summit between President Trump and Prime Minister Abe, during which they agreed to step up sanctions against North Korea to the maximum extent possible in order to press the defiant regime to relinquish its nuclear and missile ambitions. Abe explained his administration’s plan to apply unilateral economic sanctions on additional DPRK individuals and entities, while the President conveyed Washington’s idea of putting Pyongyang back on its list of state sponsors of terrorism. The President reaffirmed the U.S. defense commitment to Japan through the nuclear umbrella and other military means. They agreed to enhance their bilateral cooperation and trilateral coordination with South Korea so as to encourage China to rein in North Korea. According to Nikkei, President Trump and PM Abe discussed the possible military options that the U.S. could take, but did not take up the issue of evacuating American and Japanese citizens from South Korea in the event of a contingency.

The two leaders also agreed to promote the joint initiative of creating a “free and open Indo-Pacific” region with China’s maritime advancement in the South China Sea and the Indian Ocean in mind.

On the economic front, although the President demanded that Japan reduce its trade surplus with the United States, he did not mention a bilateral FTA. They agreed to have Vice President Pence and Deputy Prime Minister Abe continue to explore measures to rectify the trade imbalance at the U.S.-Japan economic dialogue.