The United States under President Trump 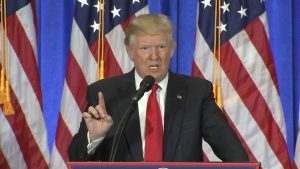 NHK’s “Close-up Gendai +” reported that almost one year has passed since the election of Donald Trump,  saying that despite his extreme remarks and hardline approach, stock prices are rising and employment in some parts of the country is recovering. The program said many people who voted for President Trump still support him, even in areas where the economy is not picking up. According to a an expert in the U.S., the President frequently uses “extreme, catchy, and straightforward” words such as “hell,” “strong,” and “disaster,” and does not use words such as “freedom,” “rights,” and “peace.” A commentator said the President is still popular because the public is hoping that he will turn the U.S. economy around, adding, however, that he will need to produce results such as tax cuts so as not to disappoint them.