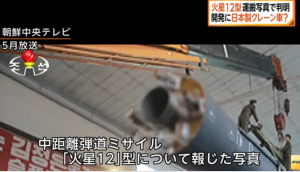 Fuji TV reported at noon that the U.S. think tank Nuclear Threat Initiative has pointed out that a crane seen in a photo released by the North Korean media when North Korea first test-launched its Hwasong-12 intermediate-range ballistic missile in May 2017 was manufactured by Kato Works. Professor Jeffrey Lewis said that the Japanese crane lifted the missile off the ground and put it on a truck. Meanwhile, a manager at Kato Works reportedly said the type of crane seen in the photo is no longer manufactured and that it should not be a problem if it is being used in North Korea because there were no export restrictions at the time of its manufacture. The manager reportedly said that the crane was probably exported about 25 years ago before the imposition of economic sanctions on North Korea. The network said the report shows once again that Japanese products are being used for missile development in North Korea.