Abe stresses importance of ratcheting up pressure on Pyongyang 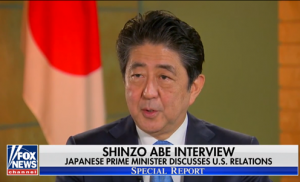 Asahi took up a Fox News interview with Prime Minister Abe, during which he vowed to step up pressure on North Korea. He underscored the importance for all UN member states to strictly enforce relevant Security Council resolutions on the defiant regime. Asked whether Japan should intercept DPRK missiles if they fly over Japan, the premier said: “Japan deals with threats in close coordination with the United States. The nation’s missile defense capabilities remain high.”

In a related story, Sankei took up press remarks yesterday by Chief Cabinet Secretary Suga, who disclosed that the GOJ has been asking the USG for cooperation in rescuing the Japanese abductees in North Korea in the event of a Korean Peninsula contingency.