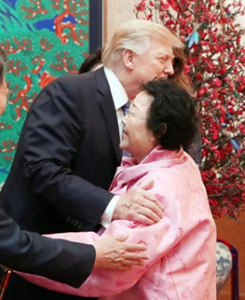 President Trump embracing an ex-comfort woman during a banquet in Seoul.

All papers reported that the GOJ filed a protest against the South Korean government yesterday over the invitation of a former comfort woman to the state banquet in honor of President Trump held last night in Seoul on the grounds that the move runs counter to the 2015 bilateral comfort women pact. A photo published by Yomiuri showed the President embracing the woman during the event. The GOJ also took issue with the “Dokdo shrimp” served at the dinner because “Dokdo” is the Korean name for the disputed Liancourt Rocks, which the Japanese call Takeshima. Chief Cabinet Secretary Suga told the press: “South Korea should avoid making moves that could have adverse effects on close trilateral coordination with the U.S.”