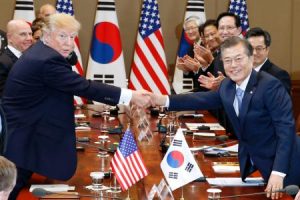 All papers reported extensively from Seoul on Tuesday’s summit between visiting President Trump and his South Korean counterpart Moon, highlighting their accord on applying maximum pressure on North Korea. While underscoring the U.S. defense commitment to Seoul as evidenced by the deployment of three aircraft carriers in the vicinity of the Korean Peninsula, President Trump urged the Kim regime to come to the negotiating table. The two leaders also reportedly agreed to expedite an ongoing review of KORUS.

The dailies said despite these agreements, there is still discord between Washington and Seoul since the Trump administration harbors distrust over the ROK government’s willingness to pursue dialogue with North Korea. Asahi expressed concern about possible disarray in trilateral cooperation between the U.S., Japan, and South Korea because of the Moon administration’s conciliatory line toward its northern neighbor. The ROK government is still negative about signing an ACSA with Japan and hesitant to start discussions on the evacuation of Japanese citizens from South Korea in the event of a Korean Peninsula contingency.

Meanwhile, Yomiuri wrote that the South Korean leader was busy playing up strong ties with the U.S. with the “political honeymoon” between the President and Prime Minister Abe in mind. President Moon is reportedly fully aware of rising concerns among the Korean public about “Korea passing” by the Trump administration, which apparently attaches more importance to ties with Tokyo than with Seoul.