U.S. Navy vessels conduct night training off Sasebo in violation of accord with municipality 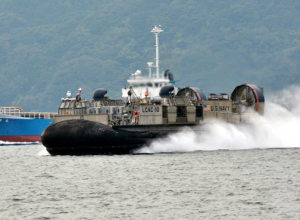 Mainichi wrote that several U.S. Navy landing craft air cushions (LCACs) carried out a drill off Sasebo Bay on Tuesday night. The paper wrote that this was the first nighttime training held since the vessels were deployed at CFA Sasebo in 1995 and apparently violated an accord on noise reduction that the U.S. military sealed with the city government of Saikai, which has hosted the hovercraft unit since 2013. The city authorities are displeased about the training that is set to continue through Thursday. The U.S. Navy dismissed local calls for cancellation by saying: “High-level Navy officials made the decision to hold the training.” A Sasebo base spokesperson also said nighttime training is necessary in order to operate LCACs safely in actual operations that could take place at any time of day.