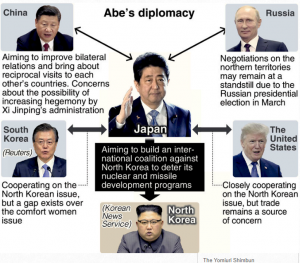 Abe will first focus on building an international net encircling North Korea, based on the further cemented Japan-U.S. alliance that serves as the axis of diplomacy and security policies.

From improving Japan-China relations to negotiating with Russia to resolve the northern territories issue, there are an array of difficult issues to deal with. The prime minister will likely face one situation after another in which his diplomatic skills will be tested.

Abe conveyed his gratitude to Trump at the beginning of Monday’s joint press conference, saying: “President Trump’s first Asian tour is a historic visit. He chose Japan as his first stop, which made the historical significance of this tour even greater. Donald, thank you so much.”

The Japanese government had asked the U.S. side to make Japan the first destination on Trump’s Asian tour, so the U.S. president could coordinate the North Korean issue with Abe before talking with his Chinese and South Korean counterparts.

Abe and Trump thoroughly discussed the situation involving North Korea over four meals they had together on Sunday and Monday. Abe appears to feel more confident in forging an international net led by Japan and the United States to tackle the North Korean issue.

From Thursday to Wednesday, Abe is scheduled to visit Vietnam to attend a summit meeting of the Asia-Pacific Economic Cooperation forum, as well as the Philippines where a summit meeting related to the Association of Southeast Asian Nations will be held.

Trump is also scheduled to visit the two countries, and the Japanese and U.S. leaders plan to join each other in urging each participating country to increase pressure on Pyongyang.

The Japanese government is working to arrange meetings for Abe with Chinese President Xi Jinping and Russian President Vladimir Putin in Vietnam.

In the field of bilateral diplomacy, Abe places importance on improving relations with China, aiming to stabilize the situation in the East China Sea and strengthen the economic relationship, in addition to gaining cooperation on the North Korean issue.

The Japanese side hopes to realize reciprocal visits to each other’s countries by Abe and Xi next year or later.

However, with Xi’s intention to make China a great power, concerns remain that Beijing may intensify pressure in the East China Sea, including waters around the Senkaku Islands in Okinawa Prefecture. It is unclear whether Abe will be able to improve Japan-China relations as he plans.

Abe also continues to make diplomatic efforts regarding Russia, aiming to resolve the issue of the northern territories.

However, it is unlikely that Putin will compromise Moscow’s position on the territorial issue ahead of the Russian

presidential election slated for March. A senior Foreign Ministry official said negotiations with Russia on the northern territories “will remain at a standstill for a while.”

Abe intends to maintain and enhance cooperation with Seoul on North Korea. However, South Korean President Moon Jae In has again brought up the comfort women issue, which could harm the nations’ bilateral cooperation.