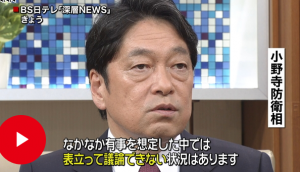 NTV reported online that Defense Minister Onodera appeared on a BS program and disclosed that no concrete discussions have been held with South Korea on how to evacuate Japanese nationals during a contingency on the Korean Peninsula. Onodera was quoted as saying: “We are always communicating with the U.S. on the issue of evacuating Japanese nationals….We cannot openly hold discussions based on the assumption that a contingency will occur.” The network said the defense minister disclosed that discussions with South Korea over the issue have not been held because “South Korea is more sensitive than Japan about the issue” and that if drills were to begin, “It would have a major impact on the South Korean economy.” In addition, Onodera said that exhaustive diplomatic efforts will be made in the middle of November, and that if North Korea does not change its policy, tensions will rise. Onodera also expressed the view that President Trump will probably convey how serious he is to the Chinese side when he visits the nation.