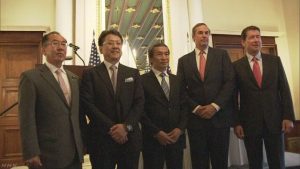 NHK reported online that Overseas Private Investment Corporation (OPIC), the USG’s development finance institution, signed Memorandums of Understanding (MOU) with Japan Bank for International Cooperation (JBIC) and Nippon Export and Investment Insurance (NEXI) at the Ambassador’s Residence on Tuesday to promote infrastructure investment in Asia by Japanese and American companies. The network said that the three organizations will cooperate and help Japanese and American companies invest in infrastructure projects in developing nations in Asia and the Middle East. The network noted that President Trump and Prime Minister Abe agreed at their summit on Monday to promote bilateral cooperation in infrastructure investment in developing nations, quoting Ambassador Hagerty as saying at the signing ceremony: “We have gathered here today to create an economic cornerstone under the free and open Indo-Pacific strategy of President Trump and Prime Minister Abe.” The network said that the move is aimed at increasing the presence of Japanese and American companies amid China’s moves to create a “One Belt, One Road” economic zone and increase its influence in Asia.