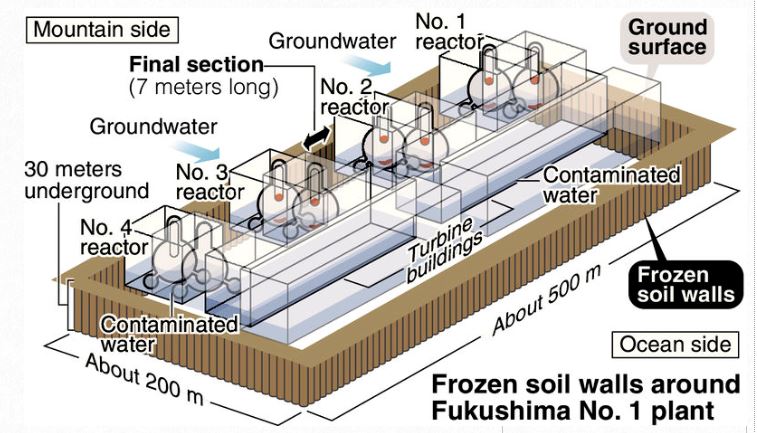 Although TEPCO insists that the inflow of groundwater beneath the reactor buildings has been reduced, some members of the Nuclear Regulation Authority are skeptical about the project’s effectiveness. With ¥34.5 billion of public funds being spent on this project, the centerpeice of countermeasures for contaminated water, its cost-effectiveness is being carefully watched.

The project entails building a 1.5-kilometer-long frozen soil wall encircling the Nos. 1 to 4 reactors, with 1,568 pipes buried to a depth of about 30 meters below ground and coolant running through the pipes at minus 30 C to chill the soil.

The process is expected to prevent groundwater from flowing into the contaminated, highly radioactive underground water at such sites as the reactor buildings, and to avoid an increase of contaminated water.

The project began in March last year, and operations to freeze the final section, about seven meters wide, on the mountain side began in August this year.

The temperature of the underground soil has remained below zero, except for a part close the surface that is affected by outdoor air, meaning the project to create the 30-meter-deep walls is almost complete.

According to TEPCO’s assessment, before the project started, about 400 tons of groundwater was flowing into the ground underneath the reactor buildings and other sites daily.

TEPCO had initially calculated that the daily inflow of groundwater could decrease to dozens of tons once the walls were installed. However, between April and September the inflow per day was between 120 tons and 140 tons, and in October it was around 100 tons. That the amount of inflow has decreased in stages as the soil freezing progressed seems to prove that the project has been effective to a certain extent. However, it is unclear if the inflow will decrease further in the future.

In parallel with the frozen soil wall project, TEPCO dug about 40 subdrain wells to pump up groundwater before it flows into the reactor buildings. It also reinforced measures to prevent rainwater from soaking into the ground by paving 1.33 million square meters of surface.

In the NRA view, those measures must also contribute greatly to reducing the inflow, casting doubt on the frozen soil walls project by saying the effect of them alone may be limited. The agency has become distrustful of TEPCO and urged the company to verify the effects.

Hiroshi Miyano, visiting professor at Hosei University specializing in system safety, said: “There is sure to be a part that doesn’t freeze completely, and it’s impossible to reduce the inflow to zero. TEPCO must continue applying this measure in tandem with draining the nearby wells for a while.”