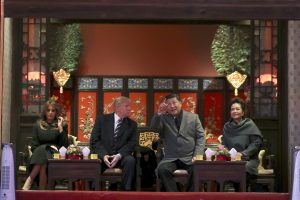 All papers reported on President Trump’s arrival in Beijing on Wednesday for his three-day visit to China. Saying that President Xi and his wife greeted the President and the First Lady at the Forbidden City and gave them a tour there, Asahi wrote that China is rolling out the red carpet for the U.S. leader while Nikkei said that Beijing is demonstrating “diplomacy as a major power equal to the U.S.” The papers speculated that President Trump will call on President Xi to take specific steps against North Korea, including a ban on oil exports, and reduce its trade deficit with the U.S.