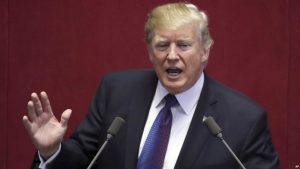 All papers reported on President Trump’s remarks to the National Assembly of South Korea on Wednesday, saying that the President stressed the United States’ policy of continuing to apply pressure on the DPRK by using all possible economic, diplomatic, military means until the nation abandons its nuclear programs. The papers wrote that the President sent a warning to North Korean leader Kim Jong Un by saying: “I also have come here to this peninsula to deliver a message directly to the leader of the North Korean dictatorship.” The papers wrote that the U.S. leader also held out the possibility of future dialogue with Pyongyang that would offer the regime “a path to a much better future.”

Asahi wrote that the President stressed the need for full implementation of UN Security Council resolutions on North Korea by citing China and Russia by name and said: “The time for excuses is over. Now is the time for strength…. All responsible nations must join forces to isolate the brutal regime of North Korea.” Quoting the President as saying, “The world cannot tolerate the menace of a rogue regime that threatens with nuclear devastation,” Mainichi wrote that the President refrained from using provocative rhetoric out of consideration for China and Russia. Yomiuri wrote that the President delivered a stern warning to North Korea, quoting him as saying: “We will not permit America or our allies to be blackmailed or attacked…. Do not underestimate us, and do not try us…. The regime has interpreted America’s past restraint as weakness. This would be a fatal miscalculation. This is a very different administration than the United States has had in the past.”

Asahi also wrote that the President took up North Korea’s human rights violations, including abductions, by saying: “Soldiers have kidnapped foreigners and forced them to work as language tutors for North Korean spies.” The paper quoted a senior White House official as saying that no other speech by a U.S. president in the past has delved into the true nature of North Korea and shined the spotlight on its human rights violations, and the President delivered a clear message that it is the responsibility of the global community to confront the threat posed by the DPRK. Asahi and Yomiuri wrote that White House Press Secretary Sanders expressed the view on Wednesday that the President will decide whether to put the DPRK back on the list of state sponsors of terrorism at the end of his Asia tour.  Sankei wrote that Chief Cabinet Secretary Suga welcomed the President’s reference to the abductions in his address on Wednesday by saying the remarks were extremely significant for seeking an early resolution of the abduction issue.