Why did President Trump come to Japan through Yokota Base? 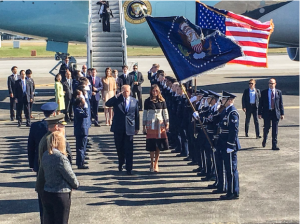 President Trump at Yokota Air Base

President Donald Trump headed for South Korea on Nov. 7 after completing his official schedule in Japan. His visit to Japan significantly differed from his predecessors because he came to the country through Yokota Air Base (Fussa City, Tokyo), over which Japan does not exercise sovereignty. Why didn’t the president come through Japan’s “front gate?”

On the morning of Nov. 5, President Trump and the First Lady deplaned from Air Force One and were welcomed by U.S. forces servicemen and their families.

“To begin my trip to Asia, there is no single place I’d rather begin my trip than right here [Yokota Air Base], with all of you – the incredible men and women of the United States military and your amazing partners, the Japanese Self-Defense Forces,” President Trump said emphatically at the podium with an American flag behind him. The troops began chanting “USA, USA.” Prime Minister Shinzo Abe was not there because he was heading for a golf course in Saitama Prefecture [to play golf with President Trump].

The place of arrival for a national leader to officially visit a foreign country is associated with a diplomatic courtesy. No successive U.S. presidents have ever got off their planes at a U.S. military base in Japan. In fact, according to an official site of the U.S. embassy in Tokyo and other sources, all seven former American presidents from President Ford who for the first time came to Japan as an incumbent president in 1974 to President Obama arrived at a civilian airport such as Haneda.

“The arrival of an American VIP at a U.S. military base reminds Japanese people of the symbolic image of GHQ General Douglas MacArthur who got off a plane at Atsugi Base when the U.S. occupation of Japan began,” said former Japanese ambassador to Lebanon and commentator Naoto Amaki. “Successive former U.S. presidents arrived at Japan’s “front entrance” as a diplomatic courtesy to Japan as a sovereign state. President Trump neither showed Japan courtesy nor does Japan seem to have pride as a sovereign state.”

On the other hand, some view the arrival at Yokota Air Base as reasonable because it did not affect people who use civilian airports. “The arrival of a foreign leader must be precisely according to schedule by giving priority his or her aircraft priority, which causes delays for civilian airplanes,” said aviation industry analyst Yoshitomo Aoki. “Especially, in the latest visit, President Trump was scheduled to travel to a golf course by helicopter. If Marine One occupied the helicopter pad at Haneda Airport, it could have affected a Japan Coast Guard’s emergency rescue operation, so the use of the Yokota was more convenient for both the U.S. and Japan.”

However, any foreign leader who arrives in Japan has scheduled packed with events. Asked why the Yokota base was used, an official of the Ministry of Foreign Affairs said: “We decided to use the Yokota base by taking various circumstances into account. Use of a U.S. military base does not constitute a problem.”

“In the past, U.S. forces have been careful to deal with base affairs in Japan in a way that does provoke an anti-base movement,” said former director-general Ukeru Magosaki of MOFA Intelligence and Analysis Bureau. “Resentment among the Japanese people against bases has declined, and a bellicose president is in power. For these reasons the U.S. government seems to be less concerned about base affairs. Although MOFA officials immediately realized that the president’s arrival at the Yokota base was inappropriate, they probably decided to say nothing out of consideration for the close relationship between Prime Minister Abe and President Trump.”