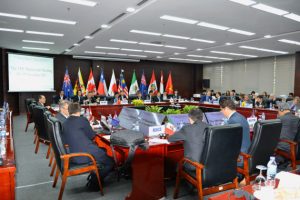 All Sunday morning papers reported that the trade ministers of the 11 TPP nations announced that they reached a new broad agreement on Saturday in Da Nang, Vietnam, saying that they agreed to suspend 20 clauses in the original text mainly on intellectual property until the U.S. returns to the deal. They also announced that the name of the new agreement will be “Comprehensive and Progressive Trans-Pacific Partnership” (CPTPP). Nikkei reported that leaders of the 11 nations will sign the agreement as soon as early next year and seek to effectuate it in 2019, adding that it will be the first mega-FTA in the Asia-Pacific region. Asahi said, however, that it remains to be seen whether the 11 nations will be able to effectuate the agreement, given that Canada refused to attend the signing ceremony at the last minute. Yomiuri wrote that Japan, which has been taking the initiative in the TPP following the U.S. withdrawal, is hoping to conclude a high-quality deal and demonstrate the benefits of a multilateral free trade framework to the U.S. Noting that President Trump defended the U.S. withdrawal from the TPP during his speech on Friday and that President Xi is aiming to increase China’s influence in the region through his “One Belt, One Road” initiative, the paper said Japan’s leadership is being tested.