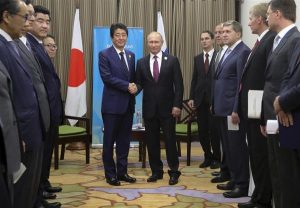 All Saturday morning papers reported on the summit held on Friday between Prime Minister Abe and President Putin on the sidelines of the APEC summit in Vietnam. The papers wrote that the two leaders agreed to strictly implement the UNSC resolutions against North Korea and work together closely. They also agreed to accelerate discussions on implementing joint economic activities in the Northern Territories next spring, begin discussions on a legal framework for the movement of former residents, hold a vice-ministerial level meeting next year, and make it possible for former residents to visit their ancestors’ graves again next year. Mainichi said that no major progress was made in the territorial discussions, adding that the Japanese side is hoping to make headway after the Russian presidential election in March.