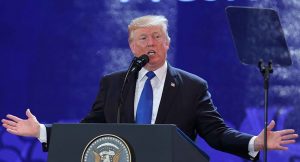 All Saturday morning papers reported on President Trump’s speech in Da Nang, Vietnam, on Friday, during which he presented a “free and open Indo-Pacific” strategy. Mainichi said that the President once again stressed the policy of promoting bilateral trade agreements based on “America First,” adding that the speech failed to present a vision on what role the U.S. will play in regional stability and prosperity and how it will deal with China’s hegemonic advancement in the region. Yomiuri wrote that the President justified the U.S. withdrawal from the TPP by saying that America will no longer participate in “multilateral agreements that tie our hands and surrender our sovereignty.” The daily added that President Trump expressed his frustration over the U.S. trade deficit and urged nations in the region to open up their markets. Yomiuri wrote the President played up his “America First” policy, highlighting the difference between his administration’s policies and the Obama administration’s rebalance to Asia.