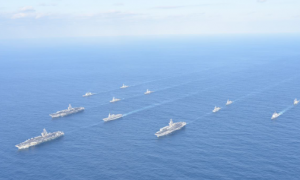 Monday evening’s Asahi, Mainichi, and Yomiuri wrote that three MSDF vessels and three U.S. Navy nuclear-powered aircraft carriers conducted joint drills in the Sea of Japan on Sunday. According to the Ministry of Defense, this was the first time for MSDF vessels to conduct exercises with three U.S. flattops simultaneously in the Sea of Japan. The ships that participated in the drills were the USS Ronald Reagan, USS Theodore Roosevelt, and USS Nimitz from the U.S. Navy and the MSDF escort ships Inazuma, Makinami, and Ise. SDF Joint Chiefs of Staff Kawano told reporters on Monday that the drills demonstrated to other nations, including North Korea, the strong bonds between the U.S. and Japan. Asahi wrote that the exercise was conducted to demonstrate the strong unity between the U.S. and Japan following the agreement reached between President Trump and Prime Minister Abe to apply maximum pressure on North Korea. According to a GOJ source, although the idea of holding trilateral exercises with South Korea was discussed, it did not take place due to a negative response from Seoul.

In a related development, this morning’s Nikkei and Yomiuri wrote that four ASDF fighter jets conducted joint exercises with three U.S. Navy carrier-born aircraft on Monday over the Sea of Japan.