Sankei Shimbun and Fuji News Network (FNN) conducted a joint public opinion poll on Nov. 11 and 12. Support for the Shinzo Abe cabinet stands at 47.7%, representing an increase of 5.2 percentage points from the previous poll (Oct. 14-15). The disapproval rating also dropped to 42.4%, down by 3.9 percentage points from the previous poll. This is the first time in two months that support rating has surpassed the disapproval rating.

Regarding President Donald Trump’s visit to Japan, 67.6% of the respondents said the visit succeeded in strengthening the Japan-U.S. relationship, while 61.1% voiced  approval of the bilateral summit and 63.2% hailed the fact that the two leaders reached total agreement at the summit on applying maximum pressure on North Korea.

On amending Article 9 of the Constitution to add a provision on the Self-Defense Forces while keeping the provisions on the renunciation of war and non-maintenance of any war potential, 59.0% were in favor, up by 5.5 points from the previous poll, while 29.1% were opposed, down by 6.7 points.

A majority of the respondents, 52%, approved of the reappointment of all ministers in the fourth Abe cabinet launched on Nov. 1, while only 38.2% disapproved.

To the question of whether they support the reelection of Prime Minister Shinzo Abe as president of the Liberal Democratic Party in the election scheduled for next fall, 41.5% answered “yes,” while 51.9% said a leader other than Abe would be better.

[Polling methodology: The survey was conducted until the calculated number of responses was obtained by placing telephone calls on a random digit dialing (RDD) basis adjusted to the gender and age composition of each survey area. A total of 1,000 men and women, aged 18 and over, across the nation were surveyed. The survey was conducted on Nov. 11–12, 2017.] 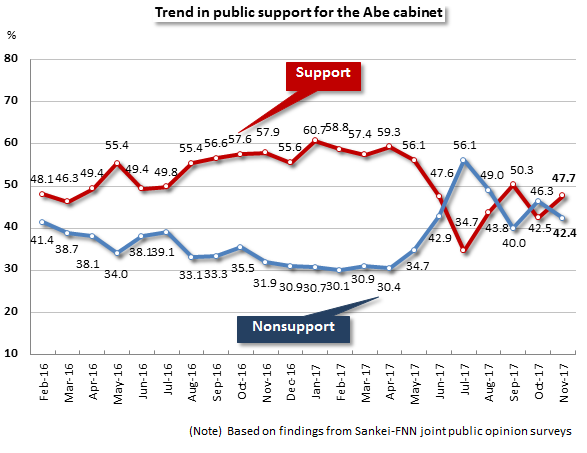