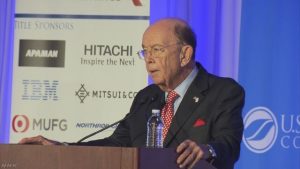 NHK reported on remarks made by Commerce Secretary Ross at a business conference in Washington on Monday in which he called for bilateral trade talks with Japan. The network aired video of the Secretary saying: “Japan and other Asian countries routinely espouse free trade rhetoric but are far more protectionist than the U.S.” While dismissing criticism of the Trump administration for advocating a protectionist trade policy, the commerce official took issue with nontariff barriers in Japan’s auto sector.

Newspapers filed similar stories, taking up his separate remark that autos account for a considerable portion of the U.S. trade deficit with Japan. With this statement, the Secretary was apparently urging Japanese automakers to reduce their exports from Japan and Mexico and increase production in America.