The Asahi Shimbun conducted a nationwide (telephone-based) survey on Nov. 11-12. Of those who responded, 55% opposed the Liberal Democratic Party’s proposal for cutting Diet question hours allocated to the opposition camp, whereas 29% were in favor. With regards to the Japan-U.S. summit held on Nov. 6, 59% showed support. But asked whether they have more hope or concern about the collaboration between Japan and the U.S. to step up pressure on North Korea, 56% answered “more concern,” surpassing the 35% who responded “more hope.”

The survey also questioned the opening of a new veterinary medicine school by Kake Educational Institution, over which the opposition camp is planning to grill the ruling parties in the Diet session. 48% responded the government “should not approve” the establishment outnumbering the 33% who answered “should approve.” Of those who support the Abe cabinet, 54% answered “should approve,” whereas of those who do not support specific political parties, 55% said “should not approve.” 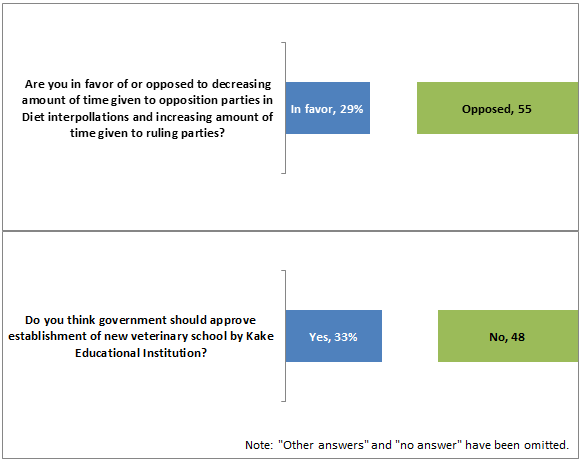