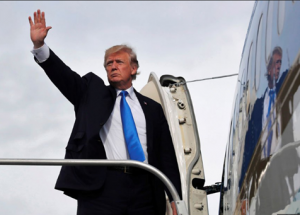 All papers reported heavily on the conclusion of President Trump’s 10-day tour of East Asia, noting that he was successful “to some extent” in enlisting support from countries in the region, including China, in tightening the noose around North Korea to curb its nuclear and missile ambitions. However, it remains to be seen whether Beijing will be willing to step up its economic sanctions on the defiant neighbor, with Sankei asserting that the President failed to obtain clear assurances from his Chinese counterpart Xi on applying stronger pressure. While noting that Washington is poised to continue applying military pressure on the DPRK as evidenced by the deployment of three aircraft carriers in the vicinity of the Korean Peninsula, Yomiuri said the President may be inclined to seek contact with the Kim regime as suggested in his tweet several days ago saying: “I try so hard to be Kim Jong Un’s friend – and maybe someday that will happen!” As the President said in a separate tweet that he will be making a major statement upon his return to Washington, the paper speculated that he might suggest dialogue with North Korea, which has refrained from staging any provocations for almost two months.

The dailies emphasized that the U.S. leader was not able to present a concrete Asia strategy during his East Asia tour, claiming that many countries in the region were apparently disappointed by the Trump administration’s failure to demonstrate its commitment to curbing China’s growing influence in the region. Tokyo Shimbun said America is being overshadowed by China. According to Yomiuri, the President did not make any statements criticizing China’s militarization of the South China Sea. Sankei wrote that President Trump perhaps chose not to criticize China at all in order to prioritize eliciting its cooperation on North Korea. Nikkei noted that the East Asian nations did not appreciate the Trump administration’s “America First” approach, arguing that U.S. leadership in the region will continue to be called into question unless it changes its inward-looking orientation. The papers added that the U.S. leader decided not to attend the East Asia Summit in Manila yesterday, citing the two-hour delay of the start of the session.